In 2021, the Virginia Tourism Corporation launched a program, DRIVE 2.0 designed to aid communities across the Commonwealth in their economic recovery from the devastating effects of the COVID pandemic. The process began with local tourism organizations submitting a Pre-Qualifying Questionnaire prior to selection. On September 1, 2021, Surry County announced that they had been selected to participate in the DRIVE 2.0 Statewide Tourism Plan implementation, focusing on tourism promotion, advocacy, and product development. The DRIVE 2.0 process, facilitated by Virginia Tourism Corporation (VTC), was designed to equip communities across the state with the tools needed to succeed in an overly competitive travel and tourism market. Surry County was one of only thirty communities selected to participate in the DRIVE 2.0 program. (Press Release)

The implementation process included a community survey period, which required the participation of a minimum of thirty representatives from local government, civic, cultural, and non-profit organizations, as well as business owners and members of the community at large. Following the survey period, a virtual Community Consensus meeting was conducted which determined wayfinding / directional signage to be a viable two-year product development project. Once this determination was made, Surry County was invited to apply for $10,000 in DRIVE2.0 grant funding to achieve this goal.

Virginia Tourism Corporation (VTC) notified Surry County of the grant award in January 2022 and staff began the process of seeking proposals from engineering /design firms to assist in the development of a wayfinding plan. The funding provided by VTC to support this effort has been used to collaborate with Summit Design and Engineering Services to develop a wayfinding plan which has been submitted for adoption into the Virginia Department of Transportation (VDOT) Wayfinding Program. Surry County anticipates using available funding through the American Rescue Plan Act Tourism Recovery Program to implement its wayfinding plan through the fabrication and installation of directional signage as described in the attached Wayfinding Preliminary Concept Plan.

The Need for a Wayfinding Program

Surry County, with the assistance of Virginia Tourism Corporation, conducted a strategic planning exercise in Fiscal Year 2018 during which the need for directional signage was initially discussed. During the DRIVE 2.0 process, participants again identified this project as an effective means to attract more guests to many of the community’s existing attractions. The fact that visitors to Surry did not know what, where, and how to access attractions in our area was of significant concern. Specifically, tourism staff became aware that GPS was diverting guests coming from the Williamsburg area via the Jamestown-Scotland Ferry to the back roads to reach attractions such as Chippokes State Park and Bacon’s Castle at the southern end of the county, rather than guiding them through the Town of Surry where they would have access to most of our community businesses and restaurants.

“We believe this makes a strong case regarding the need for signage to direct the flow of traffic in a more beneficial way,” stated Pat Bernshausen, Tourism Coordinator. "Development of a wayfinding program could potentially be a ‘game changer’ for Surry County. Logically, if we have people driving through Surry missing out on most of what we have to offer it would seem relatively easy to redirect them to the sites and activities that we are already promoting," Bernshausen added. 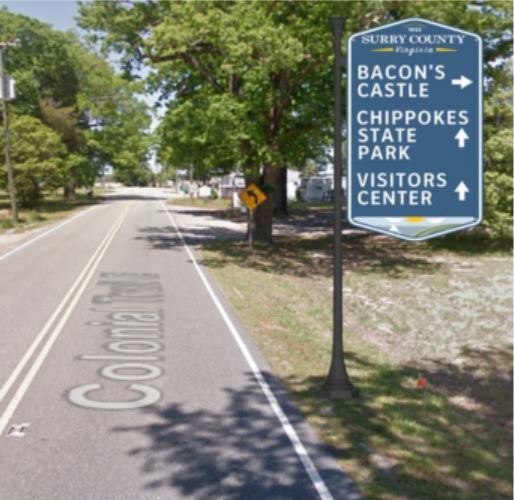 The Surry County Wayfinding Preliminary Concept Plan was submitted to the Virginia Department of Transportation by mail on October 28, 2022, and staff anticipate forthcoming notification that the plan has been accepted into the VDOT Wayfinding Program. Once this has been accomplished, Surry County will solicit bids from qualified vendors for the fabrication and installation of signs as described in the plan. Staff anticipate installation to take place in 2023-2024.

Periodic updates will be provided on this page. For additional information, interested persons may contact Pat Bernshausen, Tourism Coordinator.